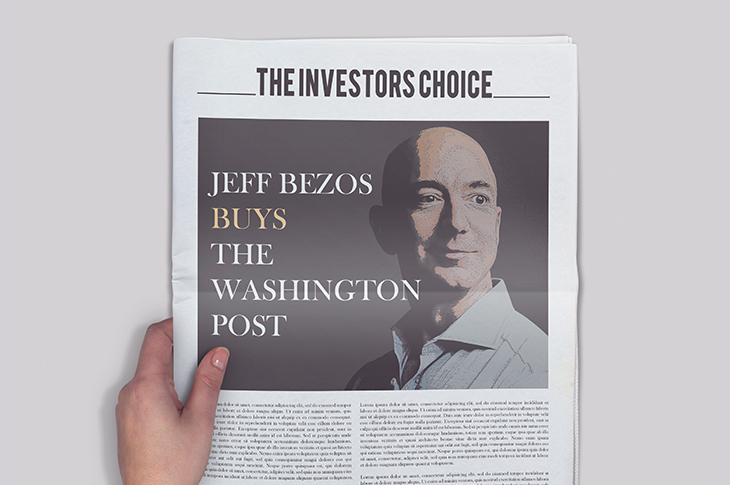 When investors come forward to buy or invest in content companies, people wonder what attracts them, and what makes them want to invest in content. There are some notable examples: Jeff Bezos buying the Washington Post; Rupert Murdoch investing in Indian regional channels and VCCircle; Mukesh Ambani buying Network18. Of course, interests would vary and are unique to each investor. But when doing the due diligence of content companies, they would be looking for specific qualities and a route to profitability. Let’s look at each case closely to understand those particular interests.

The Washington Post, a 140-year old newspaper, was owned and controlled by the Graham family for 80 years before Jeff Bezos bought it for $250 million in 2013. Naturally, many readers were surprised to hear about the change in ownership of the Post. The equivocal question then was: Why would Bezos buy a newspaper and what would he do with it?

In hindsight, it’s easy to see why Bezos was interested in the Washington Post (or why the Graham family sold a prized possession). The Post had a loyal base of long-term subscribers who loved reading a printed newspaper. But as news became freely available on the Internet and news apps emerged, reading preferences changed. The number of Post subscribers started dwindling, advertisers were walking away, and the losses were mounting. The Post had two options – either cede control and go public or sell itself completely. The former scenario is portrayed in the Hollywood film The Post.

Within three years, Bezos transformed a newspaper (print) with a legacy model of distribution and subscription — into a digital medium. Under Bezos’ leadership and guidance, the Post redesigned its website and mobile apps. It also created software called Arc to improve the analytics and marketing initiatives for the Post and its apps. It’s a data-driven approach. The Post also uses analytics to test which headlines draw more readers to its articles.  As a result, readership increased, and there is a new demographic of readers.

Amazon is a technology company, and Bezos has leveraged technology to transform the Post into a technology content company. It also has an in-house engineering team and has hired tech-savvy editors who are well-versed with concepts like SEO and digital journalism.

It’s now obvious why Bezos was interested in the Washington Post. Amazon was then thinking about launching a tablet, and it needed good content for the device. Revenues would eventually come from content that users would buy for the tablet. The Washington Post is now the default news app on Amazon Fire Tablets. This smart move has also increased traffic to the paper’s website. And the cash registers are ringing again, thanks to more advertising!

We see striking similarities in the Reliance acquisition of Network18 – a leading media group in India. The acquisition happened a year later, in 2014. At that time Reliance was making a foray into the 4G telecom space and was planning to offer low-cost handsets bundled with affordable data and call plans. The feature that would drive data consumption was content. For those who are unaware, the Network18 group owns India’s premier television channels such as CNBC TV18, CNN-IBN, CNN Awaz, Colors, and Homeshop Entertainment. It also owns news websites such as firstpost.com, moneycontrol.com and magazines (Forbes India). It has a partnership with the US-based Viacom. The Viacom18 venture offers channels such as Colors, Colors HD, Colors Infinity, Rishtey, MTV India, MTV Indies, Comedy Central, Vh1, Nick, Sonic, Nick Jr, Teen Nick. And it produces movies through the Viacom18 Motion Picture division.

Mr Ambani knows quite well that Indians love to watch movies and television serials, especially in regional languages. And if these could be offered on mobile handsets, he could have access to a market much larger than television. Back in 2014, less than 18% of the Indian population owned smartphones. If someone could offer low-cost smartphones with affordable data plans and good (video) content, they could tap a market for millions of units. To put that in perspective, the last quarter of 2016 saw over 25 million units of smartphones shipped in India.

A RIL press release said: “The acquisition will differentiate Reliance’s 4G business by providing a unique amalgamation at the intersection of telecom, web and digital commerce via a suite of premier digital properties.”

The Reliance example is about using a combination of good video content, low-cost handsets and ultra-cheap data plan to tap a huge market for digital commerce.

Media tycoon Rupert Murdoch has been on a shopping spree for content companies. But he has also forged deals with content giants like Disney, and sold his companies, a prominent example being 21st Century Fox. Murdoch’s media businesses were impacted by the way content was distributed and consumed, especially through streaming services.

News Corp is, however, keeping a sharp eye on Internet and mobile publishing platforms. In 2014 it acquired a 25% stake in the parent company of PropTiger.com, a digital real estate marketing platform. It also bought BigDecisions.com, an online consumer finance startup in India. In 2015 it acquired VCCircle, a digital data and content service focusing on private equity and venture capital. News Corp also acquired a stake in some regional television channels. It bought ESPN’s 50% stake in Star Sports which generates about 2,500 crores in revenues, and which also owns television broadcast rights for the ICC World Cup Cricket and T20 Champions League.

Content companies that show huge (advertising) revenues are certain to be on Rupert Murdoch’s radar.

We see that good content stands out in all the above examples. Consumers want good content, and if it can be offered at affordable rates, you have a large audience. Advertisers and brands want audiences. They will invest in those platforms that guarantee high viewership/readership.

That’s where the investors are going!