Purpose driven communication: How can marketers benefit from it 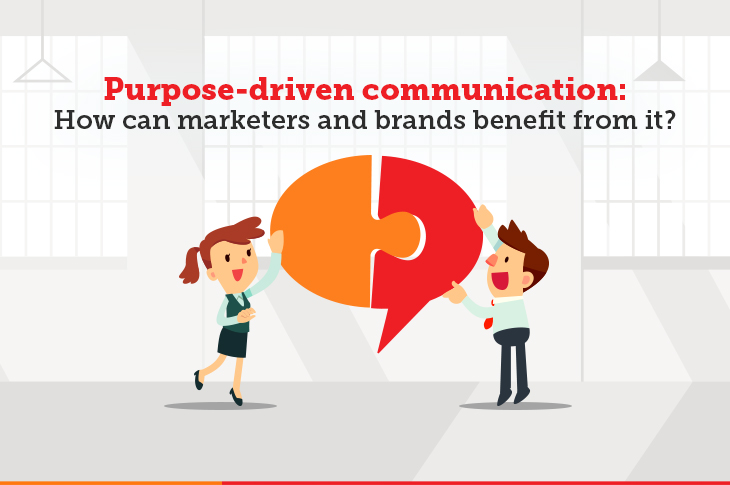 The recent phenomenon of purpose-driven communication from brands has taken the industry by storm. Through their content, brands are making a statement. Going beyond selling products and services, they are taking a stand for something they believe in.

This isn’t limited to high-end brands; even a low-involvement product like Vicks came up with a viral campaign called ‘Touch of Care’, which redefined what family is. Or take Ariel’s ‘Share the Load’ campaign, which addressed the gender inequality that exists in Indian households.

Now, the question is: what led to the shift from traditional content claiming that washing powder efficiently cleans your clothes, to purpose-driven content that took a stand against gender disparity when it comes to doing domestic chores like laundry?

Consumer culture is a concept that revolves around customers spending their income on goods or services to acquire a lifestyle and establish reputability. According to this concept, a large part of what you do, what you value, and who you are as a person in society, revolves around your consumption of products and services.

In today’s world, there can be no better measure of how people feel than what they buy. With the boom in 360-degree campaigns and experiences for promoting brands, all of us have successfully ingrained this culture and are a living part of the consumer society.

The shift occurred because we are all consumers first and we tend to select brands that we feel are extensions of ourselves. These brands are a manifestation of how we wish to be seen by the world. So, we end up buying and believing in brands that we hope will make that personal statement for us. It’s as if doing good has become a part of the buying process.

Why it is important

Delivery of purpose is the chief reason why a brand exists. It is the underlying essence that makes a brand relevant and necessary to its customers. Humanizing a brand isn’t ideal but it is necessary at this point of time.

According to a survey by Accenture (‘From Me to We: The Rise of the Purpose-Led Brand’), nearly two-thirds (63%) of surveyed global consumers prefer to purchase products and services from companies that stand for a purpose that reflects their own values and beliefs, and will avoid companies that don’t. These consumers think their protest actions, including boycotting brands or calling them out on social media, can make a difference in company behavior.

About 50% of consumers across 14 major markets, including the US, the UK, China, India, Brazil, Germany, and Japan, are belief-driven buyers. They tend towards the younger segment of society, with higher percentages seen among millennials (60%) and Gen Z (53%). (Edelman Earned Brand Study). This shows that consumers are no longer just buyers; they are stakeholders who invest their time, money, effort, and attention into the brand they believe in.

Purpose-driven communication can even foster thought leadership. The latter has become an overused concept but is nonetheless still an essential component of content marketing. It is quintessential to both B2B as well as B2C companies and allows one to define brand purpose in customer terms, which boosts brand affinity. It allows you to become a part of the conversation and let your audience know you.

Apart from adding to brand recall and humanizing the brand, response from purpose-driven communication can be overwhelming. Vicks’ ‘Touch of Care’ campaign was launched in 2017, and over the last three years the company added more than 10 million households in their rubs business alone and touched the highest market shares in the business.

Ariel’s ‘Share the Load’ proved to be more than just a communication campaign. It turned out to be a movement for social change and became one of the most awarded Indian campaigns. It won 5 Cannes Lions, the Laadli Grand Prix, Gold Emvies, and Black Dragon at Dragons of Asia.

Nike’s ‘Dream Crazy’ campaign led to a 31% boost in the company’s stock price, 5.2 million mentions on social media, and 31% increase in online sales – not to mention the applause the company got for the statement it made.

Not just a trend

Nike’s ‘Dream Crazy’, The Body Shop’s ‘Forever Against Animal Testing’, and P&G’s ‘Like A Girl’ are some of the many examples of brands that live their purpose. This has allowed them to occupy a meaningful place in consumers’ minds and has had a positive impact on their reputation.

However, creating content just to follow the trend isn’t enough. In an era of radical transparency, the purpose-led approach must extend beyond one-off campaigns and statements if is to be perceived as authentic. Nike, for example, has pledged to donate $5 million to organizations dedicated to ending gun violence. Vicks India, on its part, launched its #TouchofCare fund, helping activist Gauri Sawant with her ‘Nani ka Ghar’ project, which works towards giving a better life to many young girls.

With the rise in social causes and increased awareness among the audience, it would seem as if this change in communication and consumer preference isn’t going away anytime soon. No longer are brands solely identified with their products and services; they are much more than that. They embody stories and narratives that humanize them and set them apart. It’s a good time for brands to start displaying, investing, and encouraging the sensitivity that is much needed today.