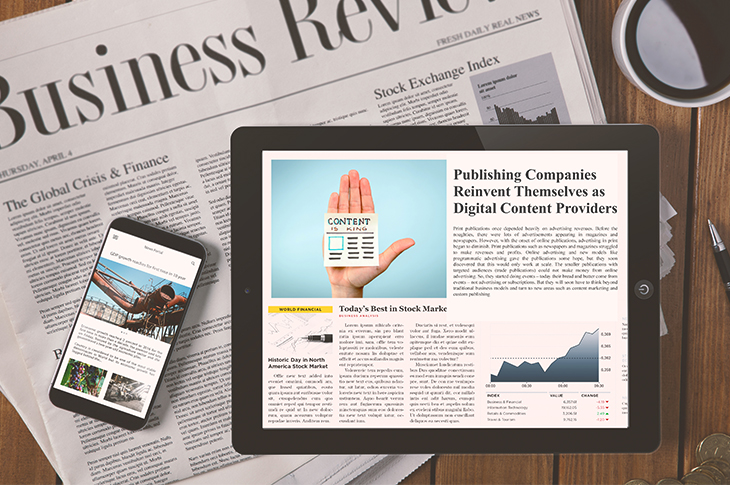 Print publications once depended heavily on advertising revenues. Before the noughties, there were lots of advertisements appearing in magazines and newspapers. However, with the onset of online publications, advertising in print began to diminish. Print publications such as newspapers and magazines struggled to make revenues and profits. Online advertising and new models like programmatic advertising gave the publications some hope, but they soon discovered that this would only work at scale. The smaller publishing companies with targeted audiences (trade publications) could not make money from online advertising. So, they started doing events – today their bread and butter come from events – not advertising or subscriptions. But they will soon have to think beyond traditional companies’ models and turn to new areas such as content marketing and custom publishing.

A quick recap from my earlier post and you can read it here.  I blogged about what attracts investors to media companies and cited three examples. To summarise: Consumers want good content, and if it can be offered at affordable rates, you have a large audience. Advertisers and brands want audiences. They will invest in those platforms that guarantee high viewership/readership. And investors will go to those content companies that get this right.

Let’s keep this statement at the back of our minds as we read further.

In media school, we learnt that content needs to be engaging; it needs to inform and entertain. It needs to make the reader more knowledgeable, to make informed decisions. If the content is good, the reader will keep coming back to the platform or newspaper or magazine. Thanks to the internet, we have so many news sites and online publications today. Readers will choose only a few for their daily reading and skim through the rest (unless they serendipitously find an interesting article while browsing the Web.

Good content can be produced for brands, using established news platforms. In fact, many traditional publishing companies are reinventing themselves and becoming digital content providers. Here is a fine example.

The Wall Street Journal (henceforth referred to as ‘the Journal’) is the largest newspaper in the US, by circulation. According to News Corp, as of June 2017, the Journal had a circulation of about 2.277 million copies (including nearly 1,270,000 digital subscriptions). Most online news is available for free though newspapers are trying to make money from digital subscriptions combined with print subscriptions. The Journal is one of the few publications in the world that makes money from online news through a subscription model (1,270,000 digital subscriptions).  The Journal launched an online version in 1996, which has been accessible only to subscribers since it launched. But that’s not where most of its revenue is coming from. WSJ is also drawing revenue from new digital platforms like WSJ Studios.

The Wall Street Journal has set up an in-house content agency called WSJ Studios for brand or content marketing. It recruited experienced editors, journalists, designers, web developers and project managers. The agency excels at producing engaging, informative, and interactive content. And it has mastered the art of making non-news content appealing to global leaders and key decision-makers — who turn to the Journal daily for actionable insights on their worlds. Of course, the Journal continues to produce news through its traditional editorial offices that work independently and autonomously – without any influence from WSJ Studios. More importantly, WSJ Studios is making money for the Journal. According to its website, it has 87 clients and 111 programs with 575 pieces of paid content.

To give you a fine example, WSJ Studios is producing bespoke content for Tech Mahindra’s ‘In the Future’ program. Read more about it here.

In the Future Program

Tech Mahindra and WSJ Custom Studios announced a three-year partnership in 2016. Tech Mahindra is a global provider of digital, IT network and engineering solutions. A team of WSJ editors from the custom content division will create ‘native content’ for Tech Mahindra. This content will be hosted on the WSJ platform. Since this content is written by journalists, readers of WSJ are more likely to read it rather than the standard collateral dished out by the marketing department.

In the Future and WSJ Studios is an example for traditional publishing companies to follow. It is a proven business model that generates revenue. While helping brands engage with consumers through content, it continues to inform readers with insightful content.